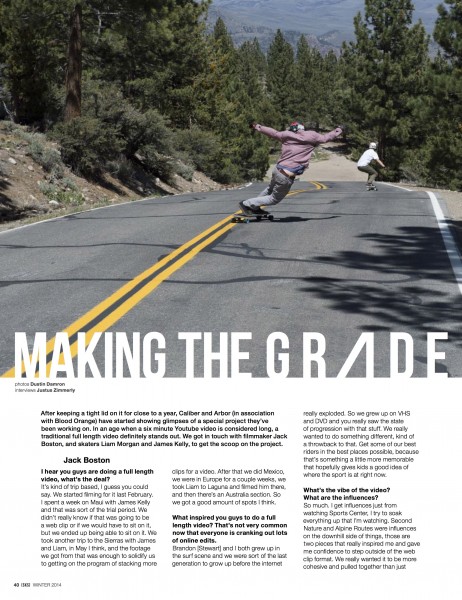 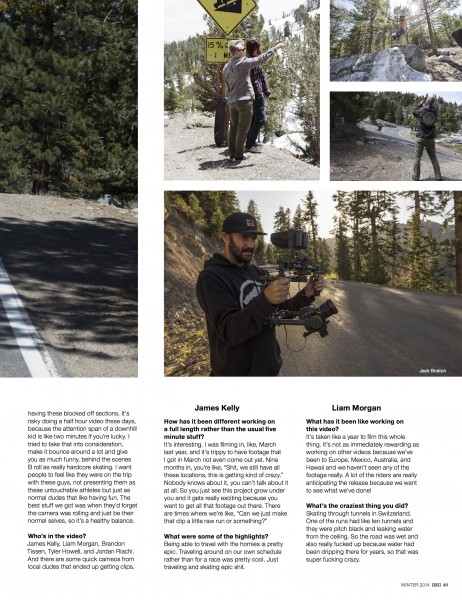 After keeping a tight lid on it for close to a year, Caliber and Arbor (in association with Blood Orange) have started showing glimpses of a special project they’ve been working on. In an age when a six minute Youtube video is considered long, a traditional full length video definitely stands out. We got in touch with filmmaker Jack Boston, and skaters Liam Morgan and James Kelly, to get the scoop on the project.

I hear you guys are doing a full length video, what’s the deal?
It’s kind of trip based, I guess you could say. We started filming for it last February.
I spent a week on Maui with James Kelly and that was sort of the trial period. We didn’t really know if that was going to be a web clip or if we would have to sit on it, but we ended up being able to sit on it. We took another trip to the Sierras with James and Liam, in May I think, and the footage we got from that was enough to solidify us to getting on the program of stacking more clips for a video. After that we did Mexico, we were in Europe for a couple weeks, we took Liam to Laguna and filmed him there, and then there’s an Australia section. So we got a good amount of spots I think.

What inspired you guys to do a full length video? That’s not very common now that everyone is cranking out lots of online edits.
Brandon [Stewart] and I both grew up in the surf scene and we were sort of the last generation to grow up before the internet really exploded. So we grew up on VHS and DVD and you really saw the state of progression with that stuff. We really wanted to do something different, kind of a throwback to that. Get some of our best riders in the best places possible, because that’s something a little more memorable that hopefully gives kids a good idea of where the sport is at right now.

What’s the vibe of the video? What are the influences?
So much. I get influences just from watching Sports Center, I try to soak everything up that I’m watching. Second Nature and Alpine Routes were influences on the downhill side of things, those are two pieces that really inspired me and gave me confidence to step outside of the web clip format. We really wanted it to be more cohesive and pulled together than just having these blocked off sections. It’s risky doing a half hour video these days, because the attention span of a downhill kid is like two minutes if you’re lucky. I tried to take that into consideration, make it bounce around a lot and give you as much funny, behind the scenes B roll as really hardcore skating. I want people to feel like they were on the trip with these guys, not presenting them as these untouchable athletes but just as normal dudes that like having fun. The best stuff we got was when they’d forget the camera was rolling and just be their normal selves, so it’s a healthy balance.

Who’s in the video?

James Kelly, Liam Morgan, Brandon Tissen, Tyler Howell, and Jordan Riachi. And there are some quick cameos from local dudes that ended up getting clips.

How has it been different working on a full length rather than the usual five minute stuff?
It’s interesting. I was filming in, like, March last year, and it’s trippy to have footage that
I got in March not even come out yet. Nine months in, you’re like, “Shit, we still have all these locations, this is getting kind of crazy.” Nobody knows about it, you can’t talk about it at all. So you just see this project grow under you and it gets really exciting because you want to get all that footage out there. There are times where we’re like, “Can we just make that clip a little raw run or something?”

What were some of the highlights?

Being able to travel with the homies is pretty epic. Traveling around on our own schedule rather than for a race was pretty cool. Just traveling and skating epic shit.

What has it been like working on this video?
It’s taken like a year to film this whole thing. It’s not as immediately rewarding as working on other videos because we’ve been to Europe, Mexico, Australia, and Hawaii and we haven’t seen any of the footage really. A lot of the riders are really anticipating the release because we want to see what we’ve done!

What’s the craziest thing you did?

Skating through tunnels in Switzerland. One of the runs had like ten tunnels and they were pitch black and leaking water from the ceiling. So the road was wet and also really fucked up because water had been dripping there for years, so that was super fucking crazy.