Issue 20 Letter from the Editor 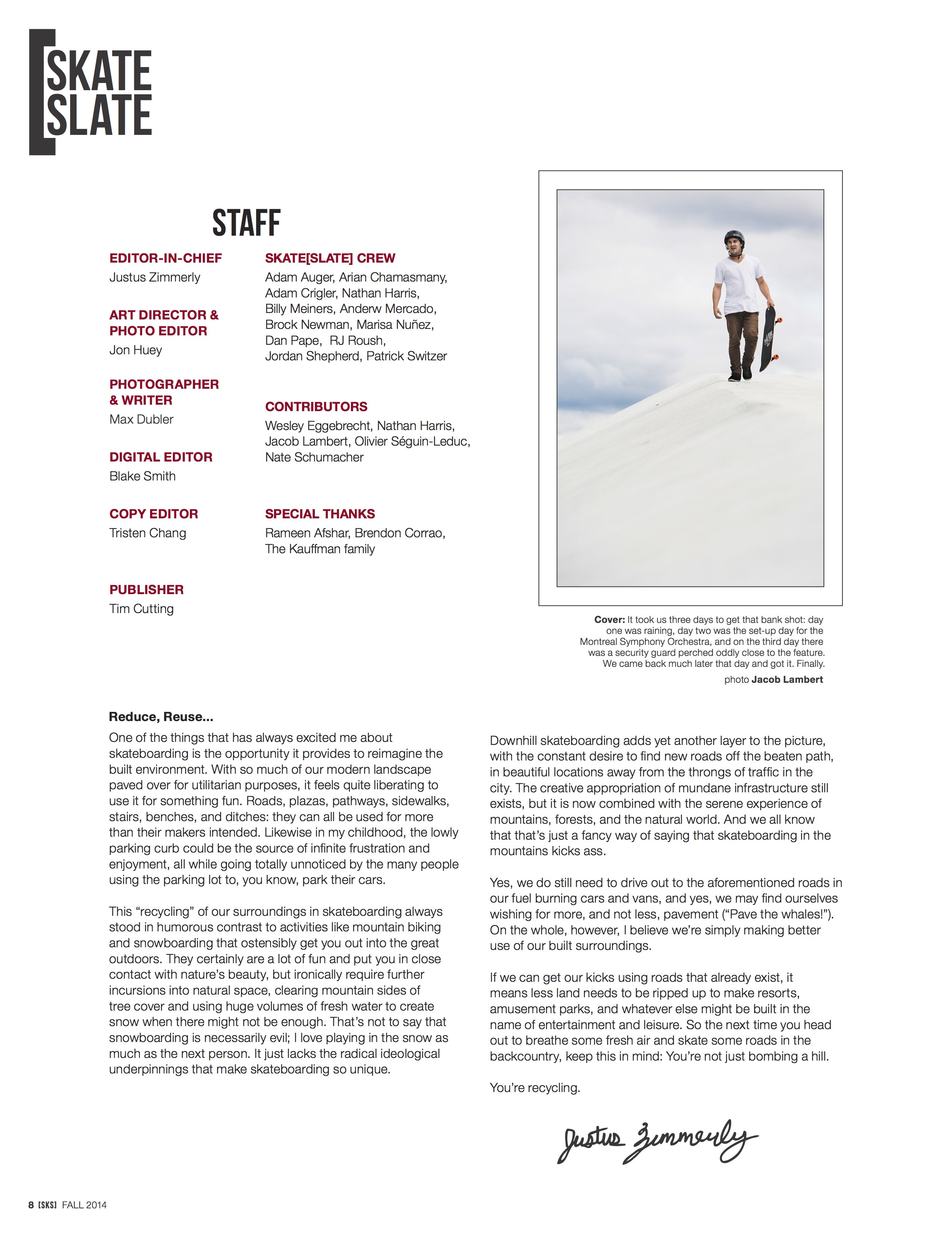 One of the things that has always excited me about skateboarding is the opportunity it provides to reimagine the built environment. With so much of our modern landscape paved over for utilitarian purposes, it feels quite liberating to use it for something fun. Roads, plazas, pathways, sidewalks, stairs, benches, and ditches: they can all be used for more than their makers intended. Likewise in my childhood, the lowly parking curb could be the source of infinite frustration and enjoyment, all while going totally unnoticed by the many people using the parking lot to, you know, park their cars.

This “recycling” of our surroundings in skateboarding always stood in humorous contrast to activities like mountain biking and snowboarding that ostensibly get you out into the great outdoors. They certainly are a lot of fun and put you in close contact with nature’s beauty, but ironically require further incursions into natural space, clearing mountain sides of tree cover and using huge volumes of fresh water to create snow when there might not be enough. That’s not to say that snowboarding is necessarily evil; I love playing in the snow as much as the next person. It just lacks the radical ideological underpinnings that make skateboarding so unique.

Downhill skateboarding adds yet another layer to the picture, with the constant desire to find new roads off the beaten path, in beautiful locations away from the throngs of traffic in the city. The creative appropriation of mundane infrastructure still exists, but it is now combined with the serene experience of mountains, forests, and the natural world. And we all know that that’s just a fancy way of saying that skateboarding in the mountains kicks ass.

Yes, we do still need to drive out to the aforementioned roads in our fuel burning cars and vans, and yes, we may find ourselves wishing for more, and not less, pavement (“Pave the whales!”). On the whole, however, I believe we’re simply making better use of our built surroundings.

If we can get our kicks using roads that already exist, it means less land needs to be ripped up to make resorts, amusement parks, and whatever else might be built in the name of entertainment and leisure. So the next time you head out to breathe some fresh air and skate some roads in the backcountry, keep this in mind: You’re not just bombing a hill.